Washington Post published an article about our study “A Quantitative Approach to Understanding Online Antisemitism”. Joel Finkelstein, Savvas Zannettou, Barry Bradlyn, Jeremy Blackburn. Arxiv, 2018.
This paper focuses on the emerging problem of online antisemitism. By analyzing over 100M posts from 4chan”s Politically Incorrect board (/pol/) and Gab, we show that the use of ethnic racial slurs, and in particular antisemitic terms, are getting worrying traction on these communities. For instance, we show a substantial rise on the use of racial ethnic terms after Trump”s Inauguration. Also, we show that there is an explosion of coded language for racial slurs and we propose a method to decode racial discourse on fringe Web communities. Finally, we study the dissemination of the Happy Merchant meme, a racist meme showing a caricature of a Jew, finding that /pol/ is an influential actor because of the large volume of generated Happy Merchant memes, while The_Donald subreddit is the most efficient actor in pushing these memes in the mainstream world (i.e., Twitter and rest of Reddit). Article: https://arxiv.org/pdf/1809.01644.pdfWashington Post: Racism and anti-Semitism surged in corners of the Web after Trump’s election, analysis shows 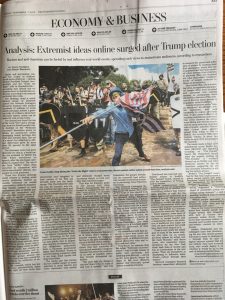 This project supports the efforts of the Research Executive Agency (REA) for Open Access to scientific results. ENCASE openly links its publications, software, datasets and other artifacts with its project information as required by REA.

The results of the ENCASE project are highlighted by the European Commission.